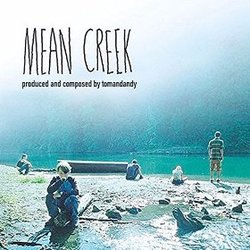 Mean Creek tells the tale of revenge gone wrong. George (Sam Peck) is a bully, who beats up Sam (Rory Culkin). Sam's older brother Rocky (Trevor Morgan) decides to play a bit of a prank on George as retaliation - he invites him on a day-trip up the creek along with Sam and Sam's girlfriend Millie (Carly Shroeder), as well as two of his buddies Clyde (Ryan Kelley) and Marty (Scott Mechlowicz). At first things seem a bit tense, but once Sam realizes that George is misunderstood - and actually a nice guy, he wants his brother to call off the prank. But, things have already been set in motion that trigger an unfortunate accident, and how it affects everyone on the trip will have dire and lasting consequences.

Providing the underscore to Mean Creek is Tomandandy. Comprised of Tom Hajdu and Andy Milburn, this duo has previously scored such films as The Mothman Chronicles and Rules of Attraction. Primarily providing contemporary scores with electronic elements, their take on Mean Creek led them to a simple yet emotionally effective score with a cello as a central element.

Tracks like "The River", which predominantly feature guitar and cello are enhanced and manipulated subtly to provide a sense that things are just a bit "off". A track like "Panic Attack" starts off with a slow cello playing a bass line, and then another joins in for the main theme, with distorted and strained warbling cello in the background to create an unnerving effect. Cues like this help provide the appropriate level of distrust, and works perfectly in the film as the once-close bonds and relationships between the characters disintegrate after the accident.

The cues are interspersed with original songs by John and Ethan Gold, which provide the characters their different motivations, and the flow of the album works well, and doesn't feel disjointed. When the score part of the album comes to an end, with "Unburial", you'll feel the pain and sorrow appropriately enough, but one significant flaw to the score is that it really works best in the context of the film. Otherwise, it would just seem like sad music without any real reason. The final song, written and performed by Gretchen Lieberum and Tomandandy, "Angel on my Shoulder", is a touching and sad eulogy for the broken innocence and forever-altered lives of the kids in the film. But as I said, without seeing the film, it just all seems like sad music.

The film itself was recently released on DVD, and while it doesn't provide anything in the way of major special features, the only real highlight is the commentary with director Jacob Estes, and some of the cast. He does comment on the score at key parts, and talks about making the film on a low budget, and in 24 days. However, missing from the disc are the deleted scenes referenced in the commentary, and for some silly reason, Paramount denies us a Mean Creek trailer, but gives us promo trailers for other films. Shame!

In conclusion, Mean Creek is a very well done film, with a good soundtrack, but it only works if you see/listen to them in that order. Without the context of the film, the soundtrack itself loses much of the required impact, and only comes off as depressing background music.