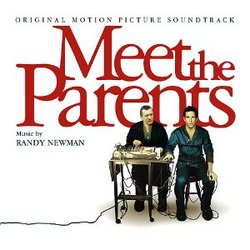 Meet The Parents is by far one of the funnier comedies this fall. Greg Focker (Ben Stiller) accompanies his girlfriend Debbie Byrnes (Nicole DeHuff) back home for her sisters wedding, with the intention to ask her to marry him. The only thing standing in his way is the permission of her father, Jack Byrnes (Robert DeNiro). A long series of misunderstandings, accidents and accusations begin to pit Greg against Jack and the laughs just keep coming. This was a film that didn't hold back, and didn't relinquish the flow. Directed by Jay Roach (Austin Powers), the score was composed by Randy Newman -and he does an excellent job keeping the humor level high.

Beginning with his main title song, "A Fool In Love", the laughs begin immediately. Not only does he have a choir sing about the Universal Studios and DreamWorks logos (on the screen at the time), but also he chooses to do so in a jesting way. ("Look how exciting!") The two other songs in the film are "Poor Me" and "Got My Mo Jo Working", and have the same up-beat optimistic rhythm and bounciness that Newman songs tend to have.

The orchestral underscore for the film is for the large part rather straightforward comedy: it's a relatively serious underscore that has a lighter edge. There is a lot of string work, and the emotional (i.e. romantic) undertones come through quite cleanly and effectively. There is a bit of Mickey Mousing in the score, which works well in the film to highlight the actions on screen, but as a listening experience are only somewhat enjoyable. The "A Fool In Love" theme is used a bit, as is the occasional use of a choir to heighten the comedy or tension (and through tension, comedy). The overly dramatic choral and orchestral flourishes in "Burning Down The House" and "Wrong Cat" work well, and we certainly do feel bad for Greg when he is (of course wrongfully) accused of any bad deed - mainly because Newman's music reminds us to do so.

There are three songs at the end of the album which consist of the soft-rock "I'm Your Puppet" by Bobby Womack, the oldie "Ya Ya" by Lee Dorsey, and "Big Chief" by Dr. John. That last one didn't really seem to fit in with the rest of the album, but I suppose the inclusion was appropriate due to the other songs being included. As a bonus, a "hidden" (i.e. unlisted) track of "A Fool In Love" as performed in the end titles is included. This version has a duet with Newman singing in English, and Susanna Hoffs crooning in breathy French. It's quite funny, and the inclusion of a sleazy accordion does not go unnoticed.

The film had a huge box-office opening, and I'm sure that it will have continued success for the next few weeks. So if you haven't seen it, by all means do so! Be sure to pick up the album - it makes a nice companion piece to the film, and the Newman songs are worth the price alone. Released by DreamWorks Records, the album runs 40-minutes long.