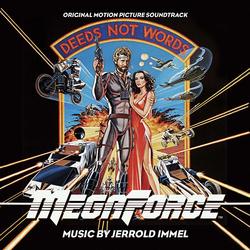 Immel's score for Megaforce is a remarkable blend of live orchestra with electronic instruments, something that had not been done very often at that time. Most scores in 1982 were largely either all-electronic scores or all-orchestral scores, rarely were they integrated. For the electronic elements of the score, Immel worked with Craig Huxley, a noted synthesist responsible for creating the Blaster Beam, the ultra low frequency instrument used to create unique electronic sounds for films such as Meteor and Star Trek: The Motion Picture.

At the time of the film's release, the composer had put together an album presentation of his music. Because the film did not do well at the box office, an album was never released. BUYSOUNDTRAX is excited to release this presentation on compact disc, which includes music written for the film but was not used, such as the end title suite. The producers chose to end the film with a song by the rock band 707 and it is not included on this release. While much of the dynamics of the composer's final mixes were lost in the film's soundtrack, which gave equal weight to the battle sequences and the roaring engines of the vehicles, this unique mixture of electronics and orchestra can now be appreciated on this recording.

BUYSOUNDTRAX Records presents Megaforce, the first compact disc release of music by veteran composer Jerrold Immel. The booklet features notes by Randall Larson, discussing the history of the project and including the composer's participation. This is a limited edition release of 1000 units.