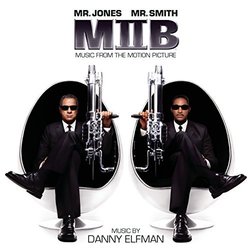 Some films have no real purpose in being made.  That statement holds especially true for some film sequels.  In the case of Men in Black II, there was no real need for it to be made.  But, as we all know, Hollywood doesn't really worry too much about necessity.  So we end up with a film like Men in Black II.  To its credit, the film was entertaining and I never found myself glancing at my watch, since I felt that the films pace had time flying on by.  Of course, after the face, I did discover that the reason for that was due to the films incredibly short running time.  The plot line is rather similar to the first film, except that the roles are now reversed: J (Will Smith) needs to get K (Tommy Lee Jones) and his memory back, or else the deadly (yet stunning) Serleena (Lara Flynn Boyle) will destroy the earth.  Yeah, there are other plot elements going on, some with strangely familiar parallels to those of the first film, but I'm not going to get into them here.  Returning to underscore this sequel is composer Danny Elfman, who got an Academy Award nomination for his work on the first film.  Elfman's score fits the film like a well-tailored suit, and in some ways, actually improves upon the original score.

The "Logos" and "Titles" bring us the familiar Men in Black theme that we heard in the first film, but with a slight variation.  It's enjoyable, and the opening title sequence, filled with planet after planet being destroyed, gives it a bit of a Mars Attacks! kind of flare.  Elfman employs a chorus in this score more than he did in the first film, and the swinging bit at the end of "Titles" gives it a bit of a retro-60's edge.  Action cues are not absent on this album, that's for sure.  From "Big Jeff" to "The Chase" and "The Light", Elfman uses the mixture of orchestral and synth percussion that he tried in Planet of the Apes and mastered in Spider-Man.  In fact, this score is a bit like that latter film, mixed with Men in Black.

Of course there are some emotionally softer cues, such as "Heart Thump", "The Real Story", and parts of "The Light".  The ending of the film (in "The Finale") is so similar in concept to the end of the first film, that you have to wonder if the writers even bothered to try to do something original for this film.  However, Elfman's score is book ended on both sides by "source cues" for the worms: "Worm Lounge #1" and "Worm Lounge #2" are jazzy Mancini-esque renditions of the main themes heard in the film.  Cheesy?  Yes.  Highly enjoyable?  Absolutely!  Finally, Elfman takes us back to the main titles, as he is prone to do, with "Titles Revisited" - a remix of the main titles track, of a sorts.

What album for a Will Smith film would be complete without a Will Smith song?  In this case, we get "Black Suits Comin' (Nod Ya Head)", a song that is thankfully at the end of the album, so you can just stop it if you have no desire to listen to it.  Coming right before it, though, is the rather amusing rendition of "I Will Survive" as sung by Frank the Pug.  The replay value on this track is slim, but it's novel and amusing.

In the end, this score wouldn't have existed if not for Hollywood's tendency to make sequels for films that make money, regardless of the need for them.  That being said, I'm glad Elfman didn't just rehash his old score, but rather worked from it as a base, and improved upon it in some subtle ways, much like he did with Batman Returns.  Is this a better score?  Debatable - that's for you to decide.  Fans of Elfman and Men in Black and Mars Attacks! will find this one worth picking up.