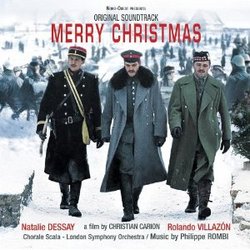 There are two things that I cherish above all in a film score: originality and passion. In these days of composing-by-numbers and temp track love, a lot of movie music feels mechanical and aseptic. A score which explores a sound that has never been used before or which is unafraid to let go and make a statement, to explode in a majestic theme, to serenade us with a heart-warming melody, to tell the percussion player to play fortissimo, that is a score which is already raising a proud head above the herd. Philippe Rombi\'s score to the French film Joyeux Noël (in English, Merry Christmas) may not break new ground, but it shows a passion for music that few film composers nowadays are allowed to muster, silenced (or at least held back) as they are by an industry that rarely dares to go beyond expectations.

In a sea of platitudes and remakes, Joyeux Noël made me happy to be a film score collector and for that it deserves the highest honors. On Christmas Eve, 1914, during the Great War, the French, German, and Scottish troops decided on a cease-fire and stopped killing each other for one night, celebrating and burying their dead instead. Rombi\'s approach to the material is to remain within the bounds of the European classical orchestra but to infuse its sound with an eagerness and an honest heart that is seldom heard nowadays. He scores the war in the trenches with a powerful Williams-esque adagio for strings and brass punctuated by timpani and snare hits so loud they had my subwoofer shaking. It is a testament to Rombi\'s fearlessness with regards to musical dynamics and Simon Rhodes\' crystal-clear recording which shows great depth and an amazing range.

The themes Rombi weaves into his tale are all memorable, hummable, and quite penetrating, such as his instantly recognizable Fraternizers\' Hymn, which is similar to Morricone\'s theme for Reagan from The Exorcist II. It is presented on a single piano in track three and comes back under various guises throughout the score. It is the glue that holds the music together and is easily a classic of the genre. In "I\'m Dreaming of Home", Rombi adds lyrics and creates a beautiful and warm rendition of the hymn for girl\'s choir, which recalls Williams\' masterful touches in such scores as Home Alone and A.I. The Scotsmen are portrayed by the use of bagpipes in a few cues and their distinctive style of pipes and drums is lent to the hymn in "Invitations: \'I\'m Dreaming of Home\'". The melody is so outstanding and touching that I have no difficulty slipping it in between John Williams\' best themes of the eighties.

The composer also makes extraordinary use of vocal elements throughout the score. A female opera singer captures our attention with an "Ave Maria" in the opening bars of the score; a German duet is heard in "Bist du Bei Mir"; the orchestra quietly accompanies a powerful operatic rendition of "Silent Night" in German; a celebrating version of the Fraternizers\' Hymn introduces "Adeste Fideles"; and, finally, the girl\'s choir returns in "Fraternizers\' Hymn (Murmurs and Vocalises)", gently humming then ah-ahing the spirited and longing theme. I don\'t believe we have heard this diverse and masterful use of vocal elements since the last chapter of The Lord of the Rings trilogy and it is a great pleasure to discover a composer who is as apt with choral elements as he is with orchestral parts.

There are more themes and more brilliant passages in Joyeux Noël than I have space to rave. Rombi\'s score surprised me by surpassing my expectations. This is a composer who was given the canvas and the permission to exploit every tool at his disposal and, where others might have shied away, he embraced it and did a superb job. Those who miss the catchy and emotional melodies of John Williams\' past career will especially take a liking to Philippe Rombi\'s work. For everyone else, there is enough quality material to feed an army of even the most jaded of film score aficionados; so dig in and don\'t feel shy encouraging a score that dares to impress, surprise, and touch the coldest of hearts on the coldest of all nights.