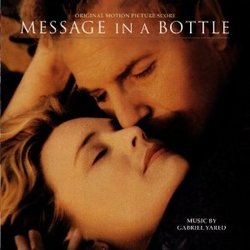 Message in a Bottle - Original Score

Review: Message In A Bottle

The best recommendation I can give this score is that I have been looking forward to writing about it. I first experienced this music when I saw the film a few months ago. As soon as the movie was over, I ran to the nearest record store, in great anticipation of finding the score and buying it on the spot. You can imagine my disappointment to find that all that was available was a disc of songs and one or two tracks of actual score from the film. Bah! I HATE it when that happens. Now they have me waiting for The Matrix score as well, but that's another story. Bygones. Finally, and to my great joy, Atlantic has released the entire score for Message in a Bottle.

I will admit that my first experience with Mr. Yared's music, The English Patient, was not a happy one. I felt that the music was far too melodramatic for the film, and besides, with the exception of Kristin Scott Thomas, I didn't care for the movie. So, I cannot say that I have been a constant devotee of his. Then, however, I saw City of Angels, and his work began to affect me. The particular piece of that score that accompanied Nicholas Cage falling "from the heavens" and down to Earth truly shook me. He'd gotten my attention.

With his work on Message in a Bottle, Gabriel Yared has my absolute rapt and uninterrupted attention. The film and its score work so well together that it is an almost symbiotic relationship. In the film, Robin Wright-Penn plays a lonely reporter who finds a mysterious bottle, with a message in it, on one of her lonely runs along the beach. Captivated by the romantic letter she finds, she sets out to find the author. It turns out that the mystery writer is none other than Kevin Costner, young, enigmatic, and due to sad circumstances, single. With Paul Newman at the head of a strong supporting cast, the action sets on from there.

Many of the characters in this film are solitary ones, and the music reflects this. A single violin, a single piano, a single guitar, only occasionally using a full symphonic push for company. By in large, the score maintains its lonesome stature, quite to the film's benefit. What this means, however, is that when the music breaks free its bonds, it is all the more powerful. Particularly on Track 6 ("Images of the Past") and Track 10 ("Some Lives Form a Perfect Circle"), the listener is seized by the sudden, but logical, force of the music.

It is the kind of score I recommend listening to selectively. One could become trapped in the music, and I am afraid it would create a long lasting melancholy. Scores for movies like Dave, Men In Black and Star Wars are fun to experience constantly. Something like this, however, is on the order of the classic scores for movies such as Wuthering Heights (the Olivier version of the film). Listening to Track 8 ("Finding the Bottle"), I know you will understand what I mean. Some music is so internally powerful, that is should be enjoyed like ages old wine.

Mr. Yared has masterfully created a "less is more" score. Instead of littering the entire piece with heart wrenching moments, which would eventually become tiresome, he has been frugal with his placement of choral and symphonic rushes. He completes his final masterstroke with Track 14 ("Storm"). Expertly using his symphony and chorus, he lifts you up out of your chair one last time, setting you down contented, exhausted, and out of breath.

The score is melodramatic: no denying that. For the context of the film and the music it needed, however, it is perfect. The closest comparison score I can image is Somewhere in Time, composed by the great John Barry. That too was melodrama at its height, but entirely appropriate in its context, and therefore, truly affecting.

So, if you're looking for techno, adventure, synthesizers, or loud banging instruments, steer clear. If however, you are in the mood for a sweet slow experience, with a great reward, this is the score for you. Sit back, close your eyes, and enjoy.