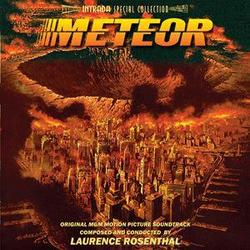 The composer's ingenuity was put to the test, as he was tasked with musically characterizing the eponymous "meteor." The resulting sound features an imposing series of weighty, dissonant chords that slide and lurch in chaotic fashion—a musical preview of the violence and terror Orpheus will unleash, should it strike Earth. This is offset by quieter, misterioso writing for the infinite deep of space.

An array of electronic and synth effects, including Craig Huxley on blaster beam, complete this picture, pointing to the asteroid's extraterrestrial origin, speed and terrible power. The score also features a jaunty march for the Russians and Americans and a broad melody that cuts to the heart of the film's human drama.

For this reissue Intrada accessed the original stereo 1/4" elements that were used for the previous issue of Meteor, featuring the same program while updating the cue titles to accurately reflect the film's cue sheet.