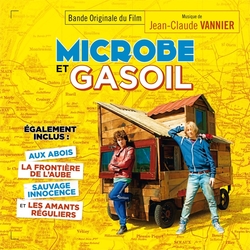 Music Box Records is pleased to present for the first time on CD the original motion picture soundtrack of Michel Gondry's Microbe et Gasoil (2015) composed and conducted by Jean-Claude Vannier.

This compilation shows the talent of Jean-Claude Vannier as a film music composer due to his eclectic choices in cinema. The album also features the original soundtracks for the films directed by Philippe Collin (Aux Abois, 2005) and Philippe Garrel: Sauvage Innocence (2001), Les Amants réguliers (2005) and La Frontičre de l'aube (2008), a score beautifully performed on piano by Jean-Claude Vannier and on violin by the great jazz musician Didier Lockwood.