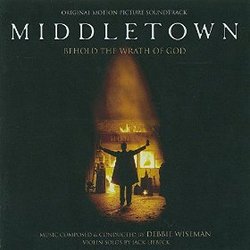 Every once in a while, a score I\'m listening to evokes a word, not a feeling. Such was the case with Middletown: its quiet string torments and urgent fiddle melodies kept whispering the word \"pious\" in my head. Even though the movie is about a fundamentalist priest returning from Africa to his small Irish town to start a cleansing that even his relatives can\'t escape, there is nothing overly Catholic about the music (no church organs or choirs); but the rich textures of the writing itself evoke the strange combination of guilt, anguish, and felicity that Catholicism famously fosters. The chord progressions reminded me of Delerue\'s Agnes of God at times; there seems to be a select number of consonant groupings that excel at recalling the Catholic faith, and Debbie Wiseman certainly taps into that vein in her score to Middletown.

With this present score and Arsčne Lupin, Wiseman shows that she is a composer who triumphs at everything that makes music good: melody, harmony, rhythm, dynamics, and orchestrations. I only mention those two soundtracks since these are the only ones I have heard from her; her résumé overflows with compositions that North American audiences might not be familiar with. I can only hope that an international \"best of\" release is in the works. Middletown opens with \"One of Our Own\", introducing the Middletown Theme, a pious and human melody beautifully accented by quiet and rich harmonies that is built in such a way as to allow the composer to repeat it almost endlessly, as if the town itself had always stood and always would. It is given voice by a solo violin, the signature of this score, played with agony (as a conscious choice as opposed to a horrible performance) by Jack Liebeck, a British virtuoso barely in his mid-twenties. \"The Hour Is Coming\" rapidly announces a second theme, an urgent, descending melody accompanied by a string ostinato and a governing brass line. The trombones pick it up at the very end of the track, but the theme firmly belongs to the violin. Wiseman does not ask for a virtuosic performance out of Liebeck the way Corigliano did of Bell for The Red Violin; rather, the writing eschews toccatas in favor of held notes where the violinist is allowed to breathe emotions into the vibrations of the string. The full scope of the violin is used throughout the score, even if the upper range is clearly favored.

Wiseman shows a genuine gift for creating drama without becoming overbearing, preferring to carefully plot her harmonies instead of letting the violins and the brass scream their anguish. My only qualm with the score resides in its redundancy: the melodic material can become stale near the end, with the urgent theme given one too many repetitions. The last minute of the last track, \"Sinners and Blasphemers\", kindly varies on the melody, allowing Liebeck to bridge the gaps with grace notes, in essence fleshing the theme out, and those variations would have been welcome throughout the score. As it stands, Debbie Wiseman\'s Middletown is a nuanced and tormented score that rarely stalls thanks to subtle touches in dynamics and rhythm. Here is a composer who knows her craft intimately and who puts a lot of American film composers to shame. While Arsčne Lupin had more verve and range, Middletown is content with excelling at the exploration of a more limited emotional baggage.