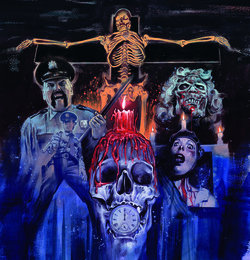 Motionsound Records is pleased to present this 2015 revamp of John Russo's Midnight soundtrack which was originally released on the Traq record label back in 1982. This issue has been completely remastered/remixed from the original 1/4" & 1/2" eight track reels, retaining all the original elements but now with brand new additional production performed in 2014 by Quintessence. Three extra background music synthesizer sound effect tracks from the movie which were performed by Paul McCollough are also included, these tracks were not present on the 1982 Traq release.

This issue is pressed on 180g blue transparent vinyl & is housed in a tip on sleeve with brand new artwork by Graham Humphreys. Limited to 500 copies only worldwide.