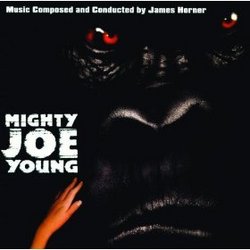 What an exciting year for James Horner! First Titanic becomes one of the top selling soundtracks of all time. Then The Mask of Zorro did well at the box office, and the score was exciting and fun to boot. Afterwards came a sequel album, Back to Titanic. Now his last album of 1998, Mighty Joe Young, is available in stores, and it's definitely a keeper.

The score to Mighty Joe Young contains multiple themes, the predominant of which is an African song entitled "Windsong". "Windsong" was written by James Horner and his now frequent collaborator, Will Jennings. The theme has a very traditional African feel to it, and as most themes go, is definitely one you can leave the theater humming. Another theme, which is most likely Joe's theme, is prominent in the opening sequence, "Sacred Guardian of the Mountain". This choral theme actually is a variation on an earlier theme Horner first explored in Willow. Large percussion and horns complement the chorus as the theme progresses, and this is truly an inspirational, hopeful theme.

I first listened to the score before I had seen the film, and thought it was a satisfactory effort on Horner's part. There are moment of action, sadness, building tension, and even romance - but it wasn't until I actually saw the film that I realized how much Horner's score added to the movie. Conversely, Horner's score actually left a better impression with me when I was leaving the theater than it did after I had listened to it the first time.

I would still have to rate The Mask of Zorro as Horner's best film score of 1998 (remember, Titanic was 1997), but I would place Mighty Joe Young as a very close #2. The score is currently available from Hollywood Records.