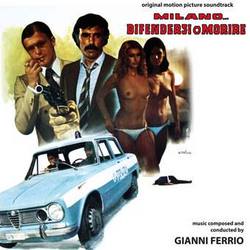 For this poliziottesco (Italian crime film), Gianni Ferrio composed an OST which starts with a subdued introduction with strings, piano, distorted guitar and sax pieces, and then develops into dramatic American blues. The composer repeats the main score with orchestral variations, sometimes nostalgic for the difficult love story between the main characters, and sometimes with a pop beat alternated with a charged-up crime drama theme for the action scenes. During the film a danceable discoteque melody can be heard, presumably a piece from a pre-existing repertoire, which was not found on the master tapes. This is a jewel of an OST, salvaged and preserved on CD for the absolute first time thanks to the only copy of the mono master which survived from the private archive of Gianni Ferrio, and which had been carefully preserved by his wife Alba.