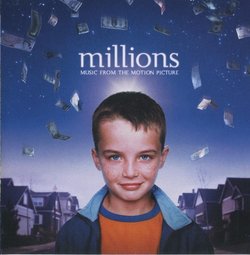 Danny Boyle has always been a director with a great ear for music and in particular a knack for finding promising up and coming artist. Be it Leftfield in Shallow Grave and Underworld in Trainspotting or Godspeed You Black Emperor in 28 Days Later. With all of his previous movies about the criminal underworld, junkies and fast running zombies (and yes I know they are not zombies by definition), it is of some surprise that his latest movie would be Millions, a Dickens-esque children's fable.

Somehow, the musical material is still clearly in Boyle's territory. Grocery list time: There's classic UK punk ("Hitsville UK") as well as very old electronica (Vangelis' mainstay "La Petite Fille de la Mer"), UK techno (S-Express' cover of "Brazil", Bosco's "Nirvana"). Everything has a Christmas vibe, shifting in tone between festive and reverential (especially in Muse's "Blackout"). The more I listen to Muse, the more they sound like a Christian Rock version of Radiohead. Taking up a majority of the album is John Murphy's score. It is a delicate piano and xylophone driven score with a children's chorus and dreamy synth-pop accompaniment, much in the style that Elfman established with Edward Scissorhands. It clicks completely with the rest of music above and unifies the album as a sweet and touching holiday treat.