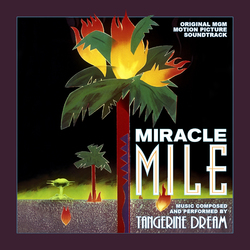 Miracle Mile was originally released on compact disc in 1989 on Peter Baumann's Private Music label nearly 30 years ago. Dragon's Domain Records is excited to bring Miracle Mile back into the marketplace on 2 CDs, newly remastered by Digital Outland and including previously unreleased music. The booklet includes exclusive liner notes written by author Randall Larson, with the participation of composer Paul Haslinger and writer/director Steve De Jarnatt. The original soundtrack cues on Disc 1 represent the score as delivered by Tangerine Dream to the director, essentially as heard in the film's mix. These tracks have never been released commercially before. Disc 2 contains the original album version, which is distinctly different in tone and texture from the actual score as heard in the movie.