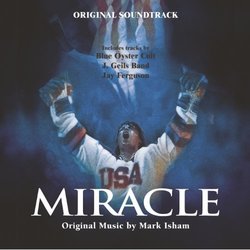 This reviewer has something of a soft spot for sporting dramas, or more specifically the scores that accompany them. Admittedly these are rarely scores that stray far from one\'s expectations of the clichés their stories so often deliver, and Mark Isham\'s score for Miracle is certainly no exception. It\'s all here; everything from the patriotic main theme for the rallying of those team mates, onward to the obligatory training music scoring that second act all culminating in the music heralding that triumphant win. If you tire of this kind of thing, by now you\'ve stopped reading and know not to bother.

Beyond the three songs that round off the album, a mere four tracks of score would at first glance appear to be somewhat underwhelming, however the arrangement has been edited as such in order to deliver a series of suites, two of which last over fifteen minutes each and it\'s a layout that happens to pay off rather nicely. This may certainly be a score you\'ve heard in many guises before, but this does not make Miracle any less of a pleasurable listening experience.

To think of Miracle as unmistakably Mark Isham does the composer little credit. After all, his expansive resume covers practically every genre multiple times over, though it is a piece that can rank safely alongside those in his catalogue that are more of a distinctly gentle minded nature. It\'s easy to highlight the album\'s longest track, "Training," as example of how the music here might often evoke memories of Fly Away Home, a charming score of Isham\'s that criminally remains unreleased.

The score as it is presented on the album does feel like a journey of sorts. Before long it successfully manages to conjure images of the trials faced by the American Olympic Hockey team in the listeners mind, regardless of whether you\'ve seen the film or know anything about the history behind the true story or not. Still, those hoping for something a little less generic will be disappointed, and Isham certainly isn\'t at his most unique here.

The Hollywood Studio Symphony is naturally on fine form, but it\'s still hard to say that Miracle remains anything other than pleasant at the end of the day. Truth be told, it\'s just one of the scores you\'ll probably know whether you\'ll like or not before you\'ve even heard it.