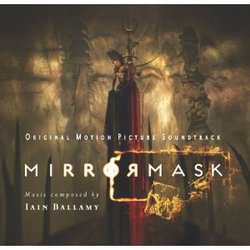 MirrorMask is the kind of score you listen to with one eyebrow constantly arched. It\'s a musical It\'s a Small World ride for a ten-piece band. It runs through waltzes, and tangos, and circus music, and polkas, and Arab music, and new age pieces, and rumbas without taking a breath. Its craziness and devil-may-care attitude are its musical identity in the absence of limited orchestral constructs and anything hummable. But I digress, as the score itself does. What is MirrorMask?

MirrorMask is the strangely animated brainchild of writer extraordinaire Neil Gaiman, whom comic book fans will remember as the genius behind the Sandman series. The story here is that of 15-year-old Helena, a circus daughter, whose mother falls ill and who, like Alice, steps into a magical world where the ailing White Queen must be saved by something called the MirrorMask. The music is by "The Fantastic Englishman", also known as Iain Ballamy, a saxophonist and composer whose website lists interests in world music as well. It follows that a good portion of the cues on MirrorMask are centered on the saxophone. The problem is not in the writing, which is more than adequate; it\'s in the ensemble, which is made up of one sax, one tuba, one trombone, one trumpet, etc. resulting in a sound that is small and annoying and quite akin to a 1997 computer game.

The cues are all over the map. There are some modern R&B beats in the opening "Sock Puppets/Flyover" and in "Running for the Bus". There are some Arabic slurs and a ney flute in "The White Queen Sleeps/The White Palace". "Giants Orbiting" is made up of drones, feedback loops, and percussion hits. And then there is this robotic, creaky rendition of the classic Carpenters song "Close to You" over a ticking clock which, I\'m hoping, has some significant role in the movie because, on the soundtrack, it\'s just one more crazy element thrown into the saucepan. By far the best cue is the longest, the ten-minute "Discoveries/Fight or Flight?/Goodbye Evil Helena" which opens with some delicate glockenspiel work before moving into more, shall I say, typical film scoring territory. That\'s before the Indian music kicks in.

The people who know me would argue that this is probably the nutty music that plays 24/7 in my neurotic brain, hence it should, at the very least, sound familiar and comfy, like an old pair of hot pink slippers. It\'s not and it doesn\'t. It will, however, delight people suffering from multiple-personality disorder.

MirrorMask is a psychedelic mess. I can\'t recommend it, but I can\'t not recommend it. It\'s well written, but I\'ll be damned if it doesn\'t annoy most people after three minutes. I can\'t honestly say there\'s no market for this kind of music. Some people are always looking for something strange, new, and different; this might be it. I myself am always looking for something strange, new, and different to add to my collection. I, however, prefer to keep my sanity on that quest.