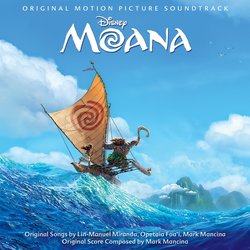 "Make way" for the soundtrack of Moana! In this wonderfully constructed animated film, Disney once again demonstrates its great ability of storytelling, making Moana its 56th Disney animated feature film. Under the direction of Ron Clements and John Musker, the film follows Moana (Auli'i Cravalho), the hardheaded daughter of the chief of their Polynesian tribe, as she is chosen by the ocean to restore the heart of Te Fiti. Along her journey she must first find the legendary, shape shifting demigod, Maui (Dwayne Johnson) and his magical fishhook. The soundtrack for Moana captures the essence of Polynesian culture perfectly without making it too apparent or lack thereof. The film features music written by Lin-Manuel Miranda, Opetaia Foa'i, and Mark Mancina, with Mancina also composing the score.

Highlight Tracks:
The Fiti Restored
Kakamora
Toe Feiloa'i
Sails To Te Fiti
If I Were The Ocean

The songs in Moana create a musical tapestry of the film's individual style, cultural influence, and classic Disney traditions. "Tulou Tagaloa" and "An Innocent Warrior" are the first two songs we hear, providing a clear basis for the style of the film. The audience later hears the melody from "An Innocent Warrior" in its reprise "Know Who You Are". This beautiful callback emphasizes Moana's rite of passage. Relating the music back to innocence reflects the progress and growth along her journey.

"Where You Are," "We Know The Way," and "Logo Te Pate" may resemble the classic Disney chorus songs best. These two in particular use their lyrics in conversation with the images on screen, very similar to "Prince Ali" from Aladdin. These songs are strengthened by their rich substance of polyphonic percussion rhythms and vocals relating to the Polynesian culture.

Another very classic Disney song is "How Far I'll Go," blending both old and new musical techniques. With the recitative-like verses and the fused beauty and power of the chorus, "How Far I'll Go" provides the perfect song for Moana, describing her and who she yearns to become. "You're Welcome" and "Shiny" are the two songs which clearly inform the audience that Lin-Manuel Miranda was a co-writer. These two songs demonstrate Miranda's diverse style in rhythm, as well as his unique and cleverly complex lyrics. Sadly, "Shiny" does not sparkle as brightly as its name. Although the song relays expositional material well, the melody and abrupt shift in musical texture/genre causes the song to feel detached and unrelated to the other songs in the film.

The score is another great representation of Mark Mancina's compositional craft. The countless times he exploits themes and song melodies throughout the score is truly impressive. The score feels very cohesive matching textures, orchestration, and instrumental pallet. From the film's dramatic action sequences, to the intimate dialogue driven or comic relief scenes such as "Battle of Wills," "Climbing," or "Village Crazy Lady," Mancina captures the essence of every musical moment splendidly.

The score is structured around beautifully transparent motifs, two of which are presented in the "Prologue." Played by the panpipes, The Ancient Theme is the first score motif heard, also presented at the beginning of "The Ocean Chose You." Although this panpipe color is used throughout the film, it is most frequently used with The Ancient Theme or the past.

The second theme presented in the "Prologue" is Te Ka's Theme. This enticing, maleficent theme is accepted with open ears. In soundtracks today, so few soundtracks use an evil theme. It is very refreshing to have an actual melody applied to the villain. This theme also creates great 'call and answer' between battle scenes toward the end of the film. In cues such as "Te Ka Attacks" and "Sails to Te Fiti," the counterpoint between Moana, Maui, and Te Ka allows for great dramatic back and forth between themes. By incorporating these various elements, the music adds thematic drama which is more than just background noise, rather it is another character of its own.

Another large motif used through the score is only based on two notes. It is a downward leap by minor third (D – B). This simple 'Call' can be described as Moana's relationship to the ocean. The beauty and power of this motif is in its simplicity. Heard in "The Hook," "Cavern," and "Tala Returns," this gesture calls the audience to the ocean along with Moana, establishing a memorable motif from an elementary musical interval.

As well constructed as this score may be, consideration must be made for what Mancina has previously composed. Unfortunately, in comparison to his other Disney animation films, Tarzan (1999), Brother Bear (2003), Planes (2013), and Planes: Fire and Rescue (2014), Moana does not stand apart from the crowd. Many of the melodic lines, string ostinatos, and rhythmic textures can be found in these other Disney scores. Tarzan is one of the most obvious examples due to its native and rhythmically (percussive) driven soundtrack. One cue in Moana that stands out in resemblance to Tarzan is at the end of the track "Moves Like An Ape, Looks Like A Man." During this Tarzan cue there is a flute/horn line which is almost the exact melody used in "Te Fiti Restored."

Overall, Moana's score packs so much detail, that it is impossible to come close to grasping it all in one review. Be it the classic Mancina score, or the brilliant ways the tuneful songs cleverly sail into the score, this soundtrack demonstrates the Disney standard. Moana and its songs prove that audiences still enjoy classic music when it comes to animation.