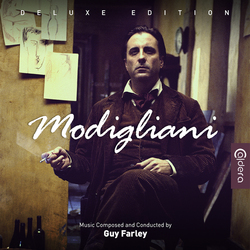 Caldera Records is proud to present its newest CD with a deluxe edition of Modigliani by Guy Farley. The score for the 2004 movie by Mick Davis starring Andy Garcia has a special place in the heart of its composer and is without doubt his richest work as it combines sensual symphonic compositions, ethnic music and arrangements of songs by Sasha Lazard.

The main theme is a favourite of many soundtrack fans and probably Farley's most beloved composition to date. The soundtrack was released ten years ago by Milan Records but the CD sold out quickly and can be found rarely on eBay and only for high prices. Because of that, we not only decided to re-release the score but also to give it a special treatment.

The CD features a different presentation of the score than the Milan CD as we were never happy with the sequencing of it. Furthermore, it offers lots of special bonuses and a running time of over 70 minutes. The 14th CD-release of Caldera Records features a detailed booklet-text by Gergely Hubai and elegant artwork by Luis Miguel Rojas. The CD was produced by Stephan Eicke and John Elborg.