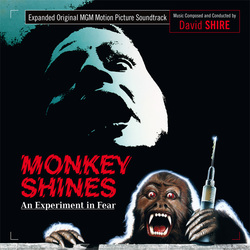 Monkey Shines: An Experiment in Fear

Music Box Records presents an extended soundtrack release of Monkey Shines: An Experiment in Fear, George A. Romero's vivid 1988 psychological horror thriller about a young man paralyzed from the neck down after an accident; he is given a specially-trained capuchin monkey to help him with his day-to-day cares, unaware that the little monkey is actually the ongoing subject of a secret genetic experiment to increase animal intelligence. As a result, man and monkey develop a dangerous psychotic link that fuels homicidal rages that are shared and accentuated between them both.

The music was composed by David Shire, in one of only a few excursions into horror territory made by the composer.

Shire's skillful music is an engaging mix of sweeping lyrical melodies and jungle drum timbres and tempos that augment Romero's visualized moments of fear and suspense. Shire delineates the thought-world of the capuchin with a growing interaction of sonic discord and shocking stingers that electrify Romero's carefully choreographed scares. In following the contours of Romero's scary storyline Shire also composes some tremendous action music which intensifies the film's excitement, suspense, and roaring action, all of which makes for a tense and thrilling listening experience.

To celebrate the 30th anniversary of the film in 2018, Music Box Records is very delighted to present this expanded soundtrack release album featuring 40 tracks and 65 minutes of music, an increase of 28 tracks and 25 minutes of music over the previous edition of this score, released by FSM label in 2002. The package features a 12-page illustrated booklet featuring exclusive liner notes by Randall D. Larson that includes a new interview with the composer about his score. The release is limited to 1000 units.