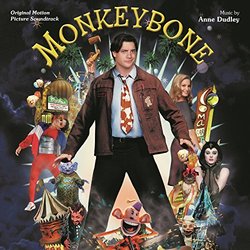 It looked like a really wacky movie, and it certainly was. Monkeybone was the bizarre story about cartoonist Stu Miley (Brendan Frasier) and his animated creation, Monkeybone. Thrown into a coma when in a car accident, Stu finds himself in the bizarre world of Downtown - a limbo where people go that lies between life and death. Monkeybone is also here, and in a bizarre set of circumstances, ends up stealing Stu's stolen "Exit Pass" and returns back to earth - in Stu's body. Antics ensue as Stu tries to get out of Downtown and prevent Monkeybone from ruining his life. Directed by Henry Selick, who brought Tim Burton's vision of The Nightmare Before Christmas to life, Monkeybone is a very Burton-inspired film, even though he didn't have anything to do with it. Nonetheless, the score by Anne Dudley has a rather Elfman-esque flare to it, and is a rather exciting and energetic romp.

Beginning with the main title sequence "The Crayon Game", a rather contemporary jazzy blues number with a kick that plays over a sequence of Stu making an original artwork that is actually a marriage proposal. It's punchy, but really doesn't fit in with the rest of the score. In "Welcome to Downtown", Stu gets in the car accident, and travels to Downtown. It's a large orchestral cue filled with energy and thrills, and plenty of "Mickey Mousing". The use of a choir to give an otherworldly feeling is a splendid touch, and when the source jingle "We Welcome You To Downtown" is an amusing interstitial. It's quicly followed by a big bold circus-type cue that underscores Stu's encounters with the unique denizens of Downtown.

"Julie's Dream" is a rather tender emotional cue, but Dudley never lets us forget the supernatural elements as indicated by an echoing choral bit at the end. A lot of the large orchestral moments remind me stylistically of classic Danny Elfman. The large amount of "Micky Mousing" in the score is a bit distracting as far as listening experiences go. The music works fine in the film, but it's hard to enjoy the music when it keeps changing rhythm to follow action that you can't see in your CD player. Nonetheless, the action cues are exciting and the last half of the album is a bizarre and delightful treat to listen to.

The film was wrought with issues, stemming from the lack of a clear target audience as well as the mixture of bad jokes and genuinely funny humor. Throughout it all, Dudley's score helped guide the film through its course. It feels a bit like Elfman's and Walker's work, but still retains an air of originality that it truly Dudley's own. The cartoonish pacing made it a little tough to listen to at times, but there are enough gems in this score to recommend it.