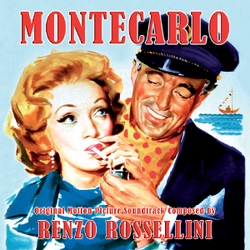 We are particularly proud to present on this CD the world premiere release of Renzo Rossellini's complete original score for Montecarlo.

Renzo Rossellini's lovely romantic score has a few stylistic similarities with some Max Steiner and Alfred Newman compositions within the same genre, is a fine example of his tasteful elegance, his masterful handling of the traditional symphony orchestra and his melodic lyricism. Particularly enchanting are the intimate love scenes which take place mostly at night and are delicately underscore.

Besides these romantic tracks there are also a few comical interludes which are imaginatively scored. In addition to Rossellini's orchestral underscore, the film also contains a lot of source music which is played in the restaurant and the casino or as a serenade on piano or violin. Besides, there are also the two Marlene Dietrich songs "Back Home Again in Indiana" and "Les jeux sont faits" (This one was especially composed for the movie by Michel Emer).