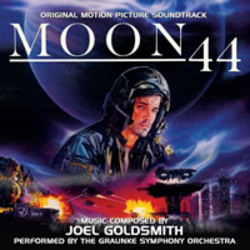 Moon 44 takes place in 2038. Multinational companies have taken control of the universe, constantly fighting each other for control of distant planets where their robots mine the priceless minerals which are now the only source of fuel back on Earth.

The score for Moon 44 was composed by Joel Goldsmith and was his first major orchestral score for a film, foreshadowing his later work on science fiction projects such as Stargate SG-1, Stargate: Atlantis and SGU Stargate Universe. The score was performed by the Graunke Symphony Orchestra, conducted by Christopher L. Stone, with orchestrations by Stone and Jack Smalley.

Originally released on compact disc by Silva Screen Records at the time of the film's release in 1990 and long out of print, BUYSOUNDTRAX Records now brings Moon 44 back to compact disc again, newly remastered by James Nelson of Digital Outland. This album to Moon 44 is a limited edition of 1,500 units.