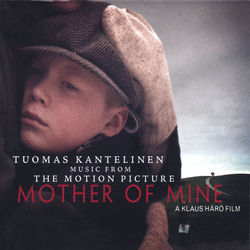 Review: Mother of Mine

I have great difficulty making up my mind regarding the score to the Finnish film, Mother of Mine. On the one hand, the writing itself is apt and the performances are appropriately nuanced and melodramatic when need be. A lot of film music students would (or should) look up to Tuomas Kantelinen, as he seems very talented when it comes to works drawing a heavy influence from classical music. On the other hand, the score didn\'t make me feel anything. It is one of those oeuvres filled with lush, minor-key chord progressions for the strings and wandering piano motifs, but it left me rather cold for some reason.

Maybe I would better appreciate Kantelinen\'s work within the context of the movie, where the "Mother\'s Theme", for instance, is linked to an actual person. Maybe I have become jaded after listening to so many different variations of the same sound in countless other scores. I hope not, but it seems like an unavoidable consequence of listening to so much film music over a period of many years.

It is difficult to pinpoint the exact reason why Mother of Mine left me shrugging my shoulders. It might lack a personality, a distinct identity, a signature, the way you can tell if you\'re listening to a Williams score from the \'80s by the magic in the writing or to a Danna score by the soulfulness of the melodies. Mother of Mine feels a bit like it\'s on auto-pilot: you can see where the score is going measure after measure, you can practically see the wheels and the cogs moving in perfect synchronicity to achieve a predictable effect. The strings are faded out at the dominant chord, leaving a lonesome piano to fill in and complete the gap. The trumpet plays whole notes as a perfect replica of the violin line. I know I am exaggerating, but you could set your metronome to the beat of the first measure and it would be in synch with the entire score. The music rarely slows down or accelerates; rather, it keeps gently pulsing at a steady beat, strings fading in at the beginning of a cue only to fade out at the end of the cue. And repeat.

Perhaps I am being unfair. The movie, Finland\'s submission at the 78th Academy Awards for Best Foreign Language Film, is about a young Finnish boy who, like 70,000 other Finnish boys, is moved to the neutral ground that was Sweden during World War II, thus leaving one mother behind and having to find a new one in a complete stranger. The score relies heavily on the piano and the string section to provide the necessary emotions of sadness and melancholy, with occasional performances by woodwinds and trumpet. Throughout this dreary affair of melodramatic string work, the cue "Tremolo" really stands out and made me take a closer listen. The piece is bleeding with urgency, the violins and celli letting go of the slow bowing movements and adopting a nervous tremolo for about a minute, after which the slow, wave-like motions of the score continue. Likewise, the moment at the halfway point of both "Life Is Beautiful" cues where the violinists leave their instrument aside for the piano to creep in with a delicate, boyish melody shows a genuine personality. Unfortunately, the heavy-handed string section fades back in a few seconds later, like the tide receding from a beach back into an ocean of sameness. The music feels like the hero of the story: it is one war score, like 70,000 other war scores.

I do have to commend Kantelinen. The writing is strong, the harmonies are clear, the rules are respected. I just wish the composer had gone beyond the rules to create something truly original and unique. As it is, Mother of Mine is functional and predictable. Then again, maybe I am becoming jaded.