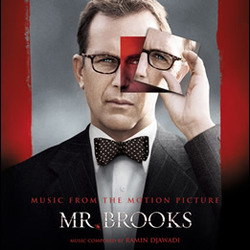 Ramin Djawadi's original score captures the tension, passion and conflict of the film in a perfect way, enhancing the variety of moods. His music is complemented by the appropriately dark and compelling track "Vicious Traditions" by The Veils.

Best known for his work as an additional composer with both Hans Zimmer and Klaus Badelt, for his Emmy-nominated theme from Prison Break, and for his score to 2006\'s song-laden Open Season, German-born Ramin Djawadi gets a chance to take the spotlight with his score for the moderately successful thriller, Mr. Brooks. Djawadi\'s preference for electronic instrumentation helps to convey the cold, calculating mindset of the film\'s title character, a compulsive murderer (Kevin Costner) who takes on an unlikely mentor role with a younger serial killer wanna-be. The film offers a Hollywood-ised interpretation of the mind of a murder addict and integrates a distracting subplot about the detective on his trail (Demi Moore), but Djawadi\'s music helps to add some emotional depth and atmosphere to what is essentially an uninsightful and aimless piece of cinema.

Somewhat like the film, there\'s nothing in this score that is likely to stay with the listener for very long, but it\'s an enjoyable experience while it lasts. Perhaps the most memorable and powerful track here is the only non-score track, "Vicious Traditions," written by Finn Andrews and performed by his band The Veils. It features effectively in the film too, suggesting through its repetitive, menacing motifs and lyrics that Mr Brooks has found himself in a situation he\'s going to have trouble escaping.

Of the score tracks, the most impressive are usually the most emotive. "Her Story" underscores one of the most effective scenes in the film, where Mr Brooks is forced to confront the truth about his daughter. It\'s one of the rare moments in the film where the score dominates the soundtrack, and Djawadi rises to the occasion, capturing the melancholy and frustration of Brooks\' realisation. "Suicide Note" opens in a surprisingly pleasant fashion, giving the thematic material a sensual and urbane sensibility through the use of snare drum and ride cymbal, but by its end turns to snarling, distorted electric guitars to reflect the more sinister aspects of Mr Brooks\' lifestyle.

Djawadi makes good use of a theme to underscore the scenes in which the murderous animal inside Brooks is revealed – a kind of ‘nasty\' theme, if you will. Relying heavily on synthesized and filtered sounds and a steady driving rhythm (at times evoking a cardiac monitor), the theme suggests the measured steadiness – and the coldness – of Mr Brooks\'s approach to killing.

Some tracks take a less satisfying approach, opting instead for dramatic overstatement. "Hallway Burial" turns into a full-throttle techno-style dance track, which seems likely to date very quickly. Similarly, parts of "Meet Meeks" wouldn\'t seem out of place at a rave party, but do seem out of place in comparison to the more restrained approach Djawadi usually adopts.

One of Djawadi\'s gifts is knowing when to distort a sound and when to leave it untouched. Echo filters are applied liberally to a variety of sounds, but usually with the intent of conveying a (uniquely American?) sense of urban isolation and coldness. At some of the more sentimental moments, such as in the title track, the music remains in its natural state, perhaps as a way of highlighting Mr Brooks\' unavoidable humanity.

There is promise in Djawadi\'s work here. He obviously has a good understanding of the relationship between score and story, and I look forward to seeing what he comes up with next.