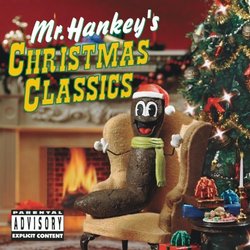 Christmas has been a rather musical holiday, what with all the Christmas Carols, television specials featuring music and songs, the Rankin-Bass animated specials, and so on. So it shouldn't come with any surprise that recently "South Park" had a Christmas special of their own - featuring their own Christmas icon, Mr. Hankey. For those unfamiliar with Mr. Hankey, he's a talking piece of poo. Toilet humor, indeed! This Chrismas episode was entitled, "Mr. Hankey's Christmas Classics", and Columbia Records took upon them the illustrious task of releasing the corresponding album.

Earlier this year, we were treated to a plethora of offensive and hilarious songs in South Park: Bigger, Longer and Uncut written by co-creator Trey Parker and award-winning composer Marc Shaiman. For this album, Parker and Shaiman worked together to provide us with more delightfully offensive morsels. There are eighteen - yes, eighteen songs on this album. They all range in their intensity. From Hitler seeing "O Tannenbaum" and Eric Cartman's hilarious rendition of "O Holy Night" (complete with backup gospel singers) to Mr. Garrison singing "Merry F**king Christmas" and Satan singing "Christmas Time in Hell", this album is sure to bring a smile to your face - and make you groan in repugnance.

Some of the "classic" songs include "The Lonely Jew on Christmas", complete with Neil Diamond sound-alike. Chef (Isaac Hayes) singing "What The Hell Child Is This?", Mr. Mackey's accapella "Carol of the Bells", and the amazing round in "Dreidle, Dreidle, Dreidle". There is plenty of tastelessness in the songs as well - from the obvious toilet humor in the first track, "Mr. Hankey The Christmas Poo" to the verses in "Christmas Time in Hell" which are in such poor taste (referring to JFK and JFK Jr. being reunited for the holidays), there is probably something in this album which will offend you. But take it in stride - it's just a silly television show, and if it gets you pissed off, it's won.

"It Happened in Sun Valley" showcases Shaiman's abilities to score large Broadway-style songs, even though it's all performed on synth instruments. (Shaiman told me they did all the songs in ten days, from start to finish!) But for those familiar with his style, there are some very notable "Shaiman-isms", especially in "Dreidle, Dreidle, Dreidle" and "Christmas Time in Hell".

There is also plenty of profanity in this album - the television show is censored, and no such restrictions apply here. So parents beware - this isn't an album meant for your 12-year olds who probably watch the show. But there are plenty of adults who watch the show, and I'm sure that they would find this a delightful tie-in to the show. Now if only they would release an album of the other songs that have been in the show, now that would truly be a Christmas present.