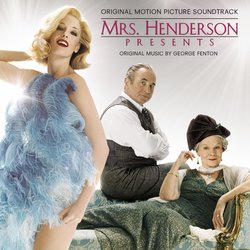 In some ways, it is hard to know what to make of George Fenton\'s Mrs. Henderson Presents. But before I can explain why that is true, I need to give you a sense of the film it accompanies.

Mrs. Henderson Presents is the latest film by the wonderful British director Stephen Frears. Frears is an eclectic director to say the least, but is best known in the United States for his work with John Cusack in the adaptation of High Fidelity and the con artist movie The Grifters. Neither of those films, however, can prepare you for the sheer joy of Mrs. Henderson Presents. This is a feel-good movie in the best sense of the word, and it never manipulates its audience to achieve that feeling. Instead, it delivers the true story of the Windmill Theater, a showplace in London\'s West End that, in the years between last century\'s World Wars, began featuring nude women in a "Revudeville." The movie follows the evolution of the show at the Windmill Theater and the life of its owner, the widowed Mrs. Henderson.

Because it focuses on a stage show, the film naturally skews towards being a musical. This fact makes it hard, as I mentioned before, to know what to make of Fenton\'s score. Fenton has often collaborated with Frears, but most of his work for the director has been rather dark in tone and classical in construction. For Mrs. Henderson Presents, however, Fenton pulled out all the stops and constructed what amounts to a concept album that is more a recorded musical than a traditional movie score. The album perfectly encapsulates the movie, showing the growth and changes made to the Revudeville in a manner that is more effective and telling than the film itself. See why I say it is a difficult to categorize score?

The cues on Mrs. Henderson Present flow effortlessly one into the other and partake in the dominant popular musical styles of the time period. The "Overture" (because every musical has one, correct?) opens with a solo piano plaintively presenting a simple melody before the brass and strings enter, slowly climbing the scale and adding instruments in a crescendo that grows to a full trill as the curtain draws back and dancers enter to a gently swinging big band. It is a pastiche of every cliche from old Hollywood musicals and Broadway revues, but it works because those sounds are so encoded in our imagination that we instinctively react with a smile.

The entire album works that way. "Revudeville" is nothing more than a minute-long fanfare; "Vivian Van Damme" struts its way across its minute and a half length with honky tonk piano and harmon-muted trumpets; "Shilling for the Hour" makes you want to get up and dance the Charleston with its slide trombone. Try and not grin and tap your foot throughout the album.

Of course, being a musical, Mrs. Henderson Presents is full of songs written by Fenton to mimic expertly the sound of songs from the interwar and war years. My personal favorites are "Babies of the Blitz," sung by the O\'Brien Sisters in a perfect imitation of the Andrews Sisters, and "Girl in the Little Green Hat," which is an infectious song with lyrics that never seem to end, but wrap endlessly around themselves.

But so much of the album is imitation that it is sometimes hard to gauge accurately exactly what Fenton has accomplished. He has crafted a score so in tune with the period it depicts that it almost washes into the background as though it were actually music from that time period. Instead of putting his own mark on the production, he spoke through the voice of others. Still, he has crafted an enormously entertaining score that is a delight to listen to, and that fact alone is enough to recommend it.