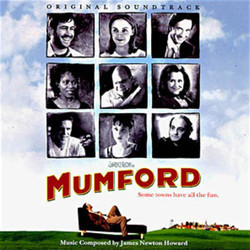 When a composer writes a score to a film, it will no doubt take a while to do. One cannot force creativity and inspiration, and when one does, the results tend to fall a little short of expectations. So when I hear about composers doing eight films in a year, I really have to wonder how much time and effort they were able to put into each score, assuming it was evenly distributed. Chances are greater that more effort was put into other scores, and some "smaller" scores fell to the side. So it appears to have been with Mumford. James Newton Howard has been rather busy as of late - scoring The Sixth Sense (a replacement score with limited time to write), Stir of Echoes, Snow Falling on Cedars, Runaway Bride, Wayward Son, and the highly anticipated Disney film, Dinosaur.

So it came as a bit of a surprise that the score to Mumford was one that seemed to fall through the cracks - after all, Howard has had a rather enjoyable working relationship with director Lawrence Kasdan on three previous films, and I would have hoped for a score of similar quality. Mumford starts out with a bang - a great jazzy big-band score reminiscent of some of Ira Newborn's work. "Chronic Fatigue Syndrome" is a nice acoustic guitar and strings piece. "Follett's Gift" has a nice jazz feel to it, and "Paper Route" has a nice sentimental quality to it. Unfortunately, it seems to go downhill from there. We are presented with the obligatory love theme, ("Meeting Sofie") orchestrated with guitars, flutes, and strings. Piano, harp, strings and light chorus spatter "Althea's Kids" with obvious childhood references, and "Skateboarding" seems like a weird attempt at recreating the great percussion work found in the main titles to Grand Canyon.

There are also five songs on this album, two by Lyle Lovett. These songs aren't too bad to listen to, and it was appropriate to include them on the album. With over 75 movies to his name, many of them with great scores, I think there is little doubt about James Newton Howard's talent. Unfortunately, we can't expect the same level of quality from all of those scores - especially when it seems to be something that is rushed out the door. I can't claim to know how much time Howard put into Mumford, but I'm sure that it was significantly less time than he has put into some of his other notable scores. The nice thing to know is that the buzz surrounding his score to Dinosaur is very positive, and I'm sure he will more than make up for Mumford next Memorial Day.