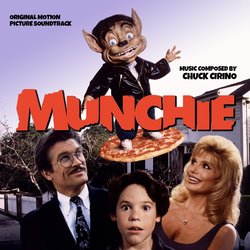 To write the film's score, Jim brought in his long-time friend and regular composer, Chuck Cirino. Inspired by a theme Chuck had briefly used in Return of Swamp Thing, Jim asked Chuck to revisit the tune and make it the main thematic foundation of the film. Cirino reworked the piece, added some new elements, and boom—there was the catchy, centerpiece melody for Munchie. Without any musical references with which to model this score after, Cirino essentially had to invent the musical style for the movie. At that time, Cirino's musical toolbox was equipped with what was then state-of-the-art synthesizers and early musical samplers like the Proteus sampler, Prophet 2000, Roland D50. Munchie possesses a carnivalesque type of score that is effervescent and tuneful, with a variety of colorful and catchy timbres that keep the music fun, with occasional forays into attitude for Munchie himself.

Dragon's Domain Records is excited to bring Munchie to compact disc for the first time, mastered by James Nelson at Digital Outland with exclusive liner notes by author Randall Larson, with the participation of the composer and the director.