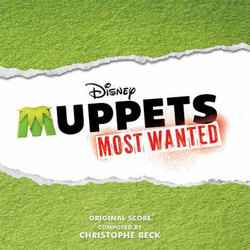 Composer Christophe Beck returns on Muppets Most Wanted after performing scoring duties on the previous film, The Muppets. Both movies are silly, yet with a lot of heart, giving Beck a solid hook to create what he calls an "over-the-top, pastiche-y type" score.

With the European setting of this latest adventure, Beck was able to integrate various regional sounds into the score. It has everything: action, some Slavic, male-chorus sounds for the Eastern European villain, Russian marches and a myriad of other styles in this frenetic, colorful score. Providing continuity with the previous score, Beck carries over the Piggy/Kermit love theme, but also introduces a new theme just for Kermit. Both themes are nostalgic, old-fashioned in nature, giving the score further depth. Featuring around 75 musicians plus choir and regional instruments, Beck allows for the various parts of the orchestra to shine. In a time when brass and strings dominate scores, Beck allows the other sections to take center stage as well, particularly the woodwinds which are given little focus these days.

As an added bonus, included on this release is the premiere release of Beck's score to the previous epic, The Muppets.