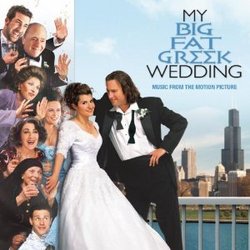 The screenplay was optioned for a mere $500.  The film cost only about $5 million to make, and now it's grossed over $100 million.  I refer, of course, to the break-out hit, My Big Fat Greek Wedding.  This film proves once again that audiences don't need explosions and visual effects to draw them to the theater - a good story with endearing characters will suffice.  The soundtrack album contains a nice blend of Greek songs (played through the film and at the wedding), as well as a selection of underscore by composers Chris Wilson and Alexander Janko.

There's something just light and airy about hearing Greek music.  I think it must be the instruments - they just have a great timbre to the sound.  Two tracks by Alexandros Xenofontos ("Stalia, Stalia", "Xekina Mia Psaroboulla") open the album, followed by "Orea Pou Ine I Nifi Mas", performed by The Greek Wedding Band featuring John Tsifliklis.  A few other songs also show up on the disc, adding the right amount of flavor and variety to the listening experience.  But filling in the gaps is the light, tender and occasionally moving score by Wilson and Janko.

Ranging from whimsical comedy ("Moose Caca") to tender emotion ("Time With You"), the score maintains a slight ethnic edge, again mainly through instrumentation.  This is a pizzicato-heavy score, and the blend of guitar with the orchestra gives it a nice contemporary touch without feeling overbearing or heavy, even during the touching moments.  The album ends with a soft piano solo ("First Date"), making it a very satisfying listen.

Just before the end of the album, though, the Wedding Band gets to sing another song "All My Only Dreams (Olla Mono Ta Oneera Mou)".  This song was disturbingly familiar, and it was only after realizing that Playtone (i.e. Tom Hanks) produced this film (along with wife Rita Wilson) that it hit me.  This song was one of the original songs written for Hanks' directorial debut, That Thing You Do.  That they were able to get that into this film is rather clever.

Running approximately 41-minutes long, this album is a very satisfying listen.  The songs complement the score quite nicely, and given the success of the film, I am sure that most people would find it a pleasant soundtrack to add to their burgeoning collection.