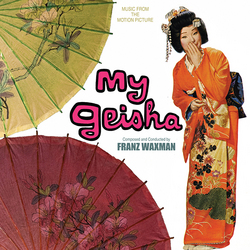 What takes My Geisha to a whole other level is the radiant score by Franz Waxman. There are many ways to approach scoring a comedy: you can accentuate the humor, you can underline the laughs, or you can try to make the music comic. Waxman's approach was to score the story being told and to let the comedy speak for itself. Hence his music is filled to the brim with dramatic scoring and beautiful melody, including his exquisite main theme. That approach was perfect because it makes us care about the characters and the story.

Because the film is about a moviemaker making a film of Puccini's Madama Butterfly, there are also a few excerpts from the opera, conducted by Waxman himself. Interestingly, he uses no Puccini references at all in his score.

Waxman seemed to have a real affinity for and love of Japan: My Geisha and his great score for Sayonara are musical proof of that. Certainly his music here is as achingly beautiful as Puccini's, making use of occasional Japanese tonalities, colors, and instruments. It is music that's rich and varied and music that works perfectly both within the film and as a stand-alone listening experience apart from the visuals.

My Geisha is making its CD debut and we're very pleased to present the entire score. The LP release left off several wonderful cues, but now we have the score complete, from the original three-track session tapes in glorious stereo sound. We include the few integral Madama Butterfly selections and some bonus material.