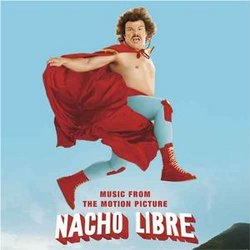 Not surprisingly, the album for the Jack Black vehicle Nacho Libre is as carefree and tongue-in-cheek as the film it accompanies. The result is a funny soundtrack, perhaps not especially challenging musically, but certainly fun. Interspersed between the music is dialogue from the film delivered chiefly by Jack Black that, ironically, offsets the fun in the album. They sound more like interruptions than transitions between songs, unlike, say, Will Ferrell\'s bits of dialogue featured in the album for Anchorman.

Like the dialogue, the music toys with a mock-serious tone, good examples of which are "Hombre Religioso (Religious Man)" and "Papas" by Mr. Loco. However, some of the tracks, like "Move, Move, Move" by Alan Hawkshaw & Alan Parker and "10,000 Pesos" by Beck are groovy instrumental tracks featuring contemporary instrumentation. "Ramses Suite" unmistakably bears Danny Elfman\'s signature, featuring an up-tempo, tango-like beat, a horn melody, and angelic female vocals, but certainly is not among his most developed or interesting themes.

Standout songs include the uplifting "Irene" by Caetano Veloso, the laid-back, 70s-sounding inclusion by John Cameron, "Half Forgotten Daydreams", or the lively, exuberant, and fast-paced contributions by Eddie Santiago ("Black is Black") and Los Lobos ("Saint Behind the Glass"). There\'s also a decidedly odd techno song, "Pump a Jam (Ramses)" by Cholotronic, which would feel out-of-place if not for the light, devil-may-care attitude of the album as a whole. The album ends with the humorous "Forbidden Nectar" by Jack Black & Mucho Macho Acapulco, certainly a great blend of song and comedy.

Nacho Libre certainly achieves its aim of entertaining with an offbeat sense of humor, but it\'s sometimes offbeat to the point of feeling too trivial for its own good. There are a fair amount of enjoyable tracks on the soundtrack, and the brief dialogue bits add to the fun. Overall, it\'s a choppy mix of humor - musical, spoken, and otherwise - but an interesting and amusing mix nonetheless.