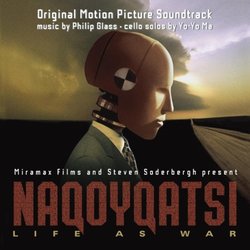 Performed by
Members of the Philip Glass Ensemble / Yo-Yo Ma

With the last installment, Naqoyqatsi ("Civilized Violence"), the Qatsi Trilogy is now finally complete after two decades.  It is a powerful, albeit long-winded expression of our planet's transformation from organic to technological, and the often unhealthy balance that transformation creates.  Philip Glass yet again presents us with a diverse and expansive landscape of music, though by now it seems a little old hat.

Like its predecessors, Naqoyqatsi is non-linear, more a series of images and music than a narrative.  Directed by Godfrey Reggio, this piece follows he same measured, somehow epic, yet somehow intimate tone.  It is tough to definitively say it is good or bad.  Either you are someone who embraces this "experiential" work or someone who does not.  From the perspective of the former, the work is solid, though at this point, audiences get the idea, and it is time for the trilogy to come to a close.

Similarly, Philip Glass' score is subject to strong likes and dislikes.  His repetitive, aggressive musical style alienates many.  This piece is very similar to the scores of the other two films, but probably more on the softer side.  Ironically, where the soundtrack is at its strongest is when it is its softest and most subtle, as in "Media Weather" and "Old World".

The larger, more epic pieces seem all too familiar to those who are fans of the trilogy.  It is redundant to the extent that I would doubt if some would be able to distinguish among the scores of the three films.  To be fair, Glass was completing a trilogy, and straying too far from the tree would be problematic.  Still, this work simply does not feel fresh.

In conclusion, though this is not a bad work, there is little distinctive in it, even for the Philip Glass or Qatsi Trilogy fans.  This soundtrack truly is for the die-hard fan who must hear all of the works.