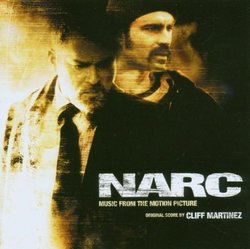 For those of you who didn't get enough of Jason Patric portraying the angst-ridden narcotics officer (narc) in 1991's Rush, here's your chance to seem him portray an angst-ridden narc in Narc.  The source of his torment in this go-around is a horrible mistake he made on the job: he shot a pregnant woman in pursuit of a suspect.  The woman lived, the kid died, and Jason got suspended.  There wouldn't be a movie unless something else happened, of course, so he's called back into service to investigate the killing of another narc.  Jason is paired with the dead cop's partner, played with full beard and belly by the perpetually magnificent Ray Liotta.  The movie itself is grim, gritty, and good.

Although there are inevitable comparisons between Rush and Narc, one significant difference is the choice of composers.  In 1991, Eric Clapton scored Rush, creating an astounding piece that was unfortunately eclipsed by the hit that also showed up on the soundtrack ("Tears in Heaven").  This time the scoring rights went to Cliff Martinez, perhaps best known for his recent work on Traffic.  Practically coincident in time with the release of the Narc soundtrack, Martinez's score for Solaris has also been released.  His other scores include The Limey, Kafka, Pump Up the Volume, and Sex, Lies, and Videotape.  He's a busy man, and getting busier.

Martinez's music for Narc makes sense, and it fits with the film, but it does not succeed as a stand-alone piece.  This score is truly incidental music.  It is meant to provide mood and setting but not much else.  In that sense, I found the music to be reminiscent of the score for Boiler Room, composed by The Angel.  Like that work, Martinez has selflessly quilted a fitting drapery for the film, but this does nothing to enhance the solo listening experience.  If you're looking for music to get depressed by while driving down wind-swept snowy cold and deserted urban streets, this one's for you.

There are occasional moderately boisterous moments in the score ("Kick My Ass in the Morning," "I Love You Baby," "Let's Sit on the House," "Don't Let it Happen Again," "You Hit," and "I Wanna Check this Place Out").  That's not much energy out of an 18-track recording, however, and even these pieces feel repetitive and restrained.  The balance of the score is an example of Martinez doing his job well to the extent that his music certainly does not get in the way of the film.  Complementing rather than supplementing can be taken to extremes, though, and that has happened here.  It would not have damaged the film if the music was permitted to have some presence.  Unfortunately, the most noticeable piece on the entire album ("Provoked") is an unfortunate creature that would have been better left writhing in agony on the recording room floor.

The score for Narc fits the movie well, but it doesn't rise above it.  If you're looking for something in this genre, I strongly suggest that you go to the "R" section of the soundtrack aisle, and pick up Eric Clapton's Rush.  You'll get more than your fill of angst and anger, but you'll also get a self-sustaining album.