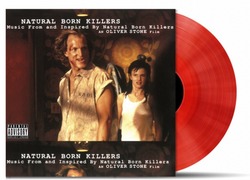 Music On Vinyl / At the Movies

Produced by Trent Reznor of Nine Inch Nails, the soundtrack to the film Natural Born Killers (1994) was a downright smash in youngster's music tastes of the era.

Some songs were written especially for the film or soundtrack, such as "Burn" by Nine Inch Nails. Other songs featured are by artists like Patti Smith, Cowboy Junkies, Leonard Cohen, Jane's Addiction, Dr. Dre and Juliette Lewis. The album has sold 500,000 copies in the United States, making it a Gold record.