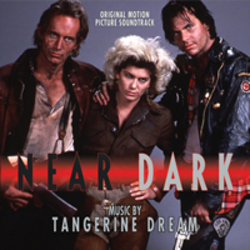 BUYSOUNDTRAX Records presents the soundtrack for Near Dark, featuring music composed and performed by Tangerine Dream for the 1987 cult horror film directed by Kathryn Bigelow.

The producers of the film had succeeded in making a unique vampire film and were intent on hiring someone to produce music for the film that also would not sound like a typical vampire film. They turned to the German electronic band Tangerine Dream.

At the time of Near Dark, Tangerine Dream's line up consisted of Edgar Froese, Christopher Franke, and Paul Haslinger, who collaborated equally on composing and performing all of their music. Coming out of ambient electronic rock, Tangerine Dream's music is characterized by progressive atmospheres, although in later film projects such as Legend, they would begin to experiment more with melodic structures.

Their music for Near Dark is primarily based on ambiance and tempo, with an emphasis on minimalistic riffing and slowly developed rhythm pads which are built up with progressive layers of electronic and acoustic instrumentation. Previously released on compact disc in 1987 and out of print for many years, BUYSOUNDTRAX Records brings Near Dark back to compact disc with remastered sound by Digital Outland. The booklet includes new liner notes by author Randall Larson on the production of the film and the creation of the score.