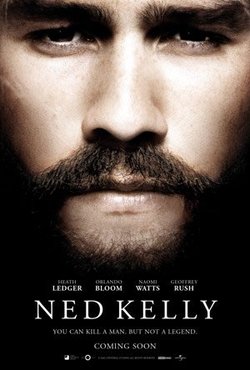 After working with Hans Zimmer's Media Ventures and writing additional music for Zimmer's projects, a handful of scores that includes Gladiator, Mission: Impossible 2, and Pearl Harbor, Klaus Badelt broke out on his own with 2002's The Time Machine, followed closely by K-19: The Widowmaker and Equilibrium in the same year. Like Zimmer, Badelt has shown a versatility in style: The Time Machine is a powerful and emotional score comparable perhaps to Zimmer's The Peacemaker with its strong brass cues, ethnic choral elements, and quieter string arrangements; likewise, Badelt showed last year that he could score action with Pirates of the Caribbean: The Curse of the Black Pearl. It was with K-19: The Widowmaker, however, with which Badelt proved his abilities with more subtle, dramatic themes, following in the footsteps Zimmer tread with The Thin Red Line, Beyond Rangoon, and the dramatic cues from Gladiator. In style, Ned Kelly falls alongside K-19: The Widowmaker.

In general, the album makes for a great listen and works wonderfully with the movie. The depth and complexity of Badelt's orchestrations match director Gregor Jordan and cinematographer Oliver Stapleton's scenic style, which captures the wild beauty of Australia. Though well orchestrated, the score is also fairly soloistic, featuring a trumpet, viola, and ethnic pipes, which give the movie an Irish/Celtic tone that captures the ethnic tension between the Irish and English settlers.

The first track of score ("Saving A Life") opens with vocals that have a Celtic feel to them, then moves into a slow string melody with acoustic guitar in the background. The solo trumpet begins "Ned Kelly", and it is here that Badelt's string orchestrations first show their power: the theme is played in the violins and countered by the cellos and again by the bass, and together the three lines dance through a series of heartbreaking chords and suspensions. The ethnic pipes come in toward the second half of "Destiny" and bring the score an Irish tone, similar to the bagpipes in Horner's Braveheart for the Scottish. These return in "The Light" as the pace quickens, and again in "Back Home;" this track also has a more suspenseful cue as the bass line plays a rhythm instead of a counter line, which adds to the drama of the scene. The pace and rhythmic quality continue into "Doomed" as the solo trumpet comes back with a fast violin line, and this brass sound color builds the tension further before breaking out into a more melodic string and French horn cue. "Outlaws" is the most martial track of the score: heavy on the bass, the solo trumpet, and low brass. After this, "The Jerilderie Letter" is a surprising change in tone, moving into a light, sprightly string line that is reminiscent of Warbeck's Shakespeare in Love. "Father" returns to the slow string lines and features the solo violin at the end before the score climaxes with "The Glenrowan Inn": renditions of the main theme pass through the martial sound, the layered strings, and the solo trumpet, then passes to a piano, which is a new instrumentation for the score, but fits the tone of conclusion. And finally, "Remembering Ned Kelly" carries the classic tone of nostalgia: a solo violin playing the main theme.

The only negative side to this album are the two tracks sung by Bernard Fanning. The album begins with the track "Shelter For My Soul," and track nine, "Moreton Bay," also features this artist. On album, I found them slightly irritating, or at least disruptive against Badelt's generally serene orchestrations. In the movie, one is background and hardly audible, the other lip-synched by a live group in the scene, so I'm not sure how necessary these were to include on the soundtrack.

Overall, Ned Kelly is a beautiful score both on album and on screen that captures every nuance of the film from the displaced and marginalized Irish culture to war to the tragic story of Ned Kelly. Though the film did not receive a wide release in America, this score proves that Badelt can handle any genre, as here he has nailed both the dramatic and ethnic, and though he still is, does not need to be compared to Zimmer for he stands well on his own.