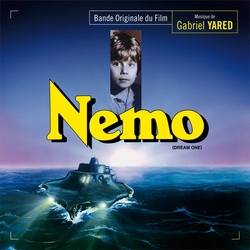 In collaboration with Yad Music, Music Box Records presents the world premiere release of acclaimed composer Gabriel Yared's original score to the 1984 fantasy/adventure Nemo (Dream One), starring Harvey Keitel, Mathilda May, Nipsey Russell, Carole Bouquet, Charley Boorman and Jason Connery. Gabriel Yared has provided a dreamlike score which is both melancholic and dramatic, yet simultaneously poignant, touching and sometimes epic. His score very often shifts from an acoustic/symphonic state to a synthetic/electronic state – as it frequently does in the composer's works over this period. Through the emotional quality of his music, mingled with the unsettling strangeness of some twisted or exotic sounds, Gabriel Yared synthesizes every aspect of his dazzling talent for this fantasy film from the 80's. The soundtrack debut of Nemo has been fully mastered from the recording session tapes. The 8-page booklet features an essay by Nicolas Magenham discussing the film and the score based on an original interview with the composer.