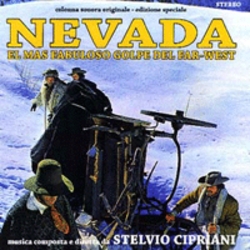 A group of seven outlaws devises a plan to attack the Bank of Sun Valley and having detonated several buildings in the city, the band flee with their booty to the snowy mountains.

Stelvio Cipriani composed an orchestral OST featuring the romantic main theme "They call it gold" sung by Don Powell and reprised with instrumental variations alternated to dramatic and mysterious themes.

For this CD the stereo master tapes of the original session have been used that allowed to discover an album mock-up that had been assembled and never issued at the time, containing 14 selections. To that material several bonus tracks with alternate versions were added, all digitally restored and remastered.