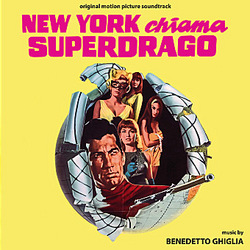 Digitmovies is pleased to venture into the wide world of Italian style Spy movies once again by releasing, for the first time on CD, the OST by Benedetto Ghiglia for the movie New York chiama Superdrago.

Ghiglia has composed a rousing orchestral OST that alternates between mystery and suspense. The action scenes in the movie feature swing, blues, latin and jazz music. As the credits roll, the author had an ingenious idea: he incorporated the sound of a phone in the orchestra. Another highlight of the piece is the wild "Super dragon Shake." This plays during the scene set at the bowling alley when Cooper glances at the young and beautiful Solvi Stubing, (we remember her as the girl from the Peroni beer commercials) who is merrily dancing away near a Juke-box next to other young men and women.

For this CD we were able to access the mono master tapes from the original recording session where we discovered about 25 unedited minutes. Previously C.A.M had issued a 33-rpm (CDR 33.16). It featured twenty-one mono tracks for a total duration of 43:01 minutes but is no longer available.