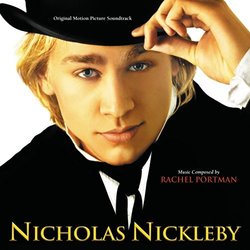 Nicholas Nickleby is your "typical" Dickensian story of a diamond in the rough, a gem, a jewel, a hidden treasure of a lad who must overcome, conquer, defeat, beat, trounce, and ultimately triumph over overwhelming, overpowering, devastating, crushing, insurmountable, intractable, insoluble, undefeatable odds to realize his true meaning in life!  A-hah!!  Victory is mine! (albeit humbly so).  In anyone else's pen, these stories are trite and told, but with Dickens they become charming.  Of course, one cannot go wrong when one christens one's characters with monikers like Newman Noggs, Wackford Squeers, and Vincent Crummles. There have been several film adaptations of this novel, and the latest attempt garnered mixed reviews.  With the likes of Alan Cumming, Christopher Plummer, Jim Broadbent, and Nathan Lane, however, there are, at the very least, several worthy moments in the film.

The score by Rachel Portman will be familiar territory for any of her fans.  Ms. Portman has scored over sixty movies by this point in her career, and with such longevity comes finesse.  Some recent high points have included Chocolat, Hart's War, The Legend of Bagger Vance, and The Cider House Rules.  Before that, Portman found success with The Joy Luck Club, and Benny & Joon.  Thematically, I found that this piece had the most in common with Portman's work on Chocolat.  Indeed, this makes a good deal of sense considering that both films revolve around a central character that is a good soul, surrounded by harsh circumstances (not to equate Joanne Harris, the author of Chocolat, with Dickens mind you - I don't want hate mail from any of you rabid Dickens-true-believers out there), but the basic stories are quite similar.

The score begins with a Newman-esque Little Women flair ("Main Titles"), but I must warn you that, try as you might, you will not see Winona, Claire, Trini, Samantha, or Kirsten anywhere in the film.  With "Journey to Dotheboys," Portman introduces Little Woman to the dark side of Bagger Vance.  Indeed, for some time, the score skips back and forth between these types of lighthearted-cum-foreboding moments, occasionally drifting into simple Elizabethan romps.  Portman has reserved a special feeling, though, for the elements of the score dealing with the character of Smike.  "Smike by the Stove," "More Jobs for Smike," "Squeers Captures Smike," "Smike is Captured" (the poor kid has no luck), "Smike in His Room," and, wait for it, "Smike Dies," blend Joy Luck Club melancholy with growing intensity.  Smike arguably has the most recognizable theme on the score, but (a) that's because he occupies a huge portion of it, and (b) it's a very good theme anyway, so I don't mind.

The only thing that I found distracting was "Brooker," which was so completely lifted from Portman's Chocolat score that I found myself checking to make sure I was listening to the right piece. I mean, it's downright eerie.  Other than that justified piece of self-thievery, however, Portman has, yet again, created a beautiful piece of music.  It's a solid listen and thoroughly enjoyable, albeit established terrain, for lovers of this type of music and film.