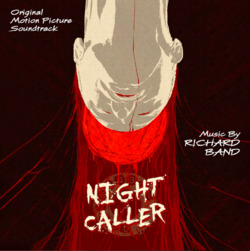 Night Caller focuses on a psychic hotline worked named Clementine (Priver), who starts receiving calls from a serial killer. The killer, James Smith, as it appears on the caller ID, loves to taunt Clementine on the phone before each murder. Soon after, Clementine begins to have visions of the grizzly deaths before he commits them. Predicting his murders before he commits them puts her into a terrifying game of cat and mouse with the killer. Enlisting the aid of her invalid father and clairvoyant co-worker, they must use their unique abilities to stay one step ahead of a maniac whose unspeakable acts in the present are nothing compared to his past and future.

Continuing their successful collaboration on Exorcism at 60,000 Feet and The Deep Ones, director Chad Ferrin returned to Richard Band to score Night Caller. "Not only has Richard created my favorite score of our three collaborations, but he did it with tremendous speed and accuracy, a testament to his tremendous talent, as well as our developing shorthand", the director said recently.