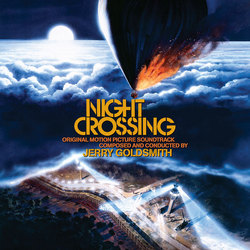 Intrada's latest release revisits its first Disney project—the 1982 Jerry Goldsmith score to Night Crossing. Covering a dramatic range of ideas, Goldsmith's score expresses both the menace and aggression of the East German locale and the soaring aspirations of two families hoping to escape from it.

The score is one of Goldsmith's busiest and throughout the action material the strings, woodwinds and piano are given an abundance of swirling, running figures that race over, under and around the thematic material. Comprised of three primary themes, the first introduces the theme for the oppressive East German military machine, a driving line of powerful brass and snarling string figures unfolding over the percussion motif and then in the trombones and tuba. The use of accordion introduces the second theme with a gentle and distant feel—a delicate waltz setting for the families that hope to build a balloon and escape from their cold environment. The third and primary theme, tackles the central subject of the film: building, testing and launching the balloon needed for the escape. The melody appears in a wide range of instrumental colors, from a delicate flute solo over harp figures to a glorious and impassioned musical finale for the entire orchestra at the close.

In addition to a few alternates appearing for the first time, an important change between this new CD and the earlier release should be noted. This change comes with those all-important pauses that occur between the many bars of solo percussion. The earlier release included numerous edits of both the percussion and intervening silences and lent a degree of forward momentum to the respective cues, but also truncated the important, rhythmically timed pauses that generated much of the suspense. This particular "percussion and pause" motif, including the meticulously timed silences between the phrases, occurs throughout the score. As such, for this release Intrada retained Goldsmith's original unaltered cues, including the exact timings of the silences integral to the musical effect. Listeners familiar with the earlier edition will probably have to become used to the longer, more deliberate pacing of these "percussion and pauses" sections of the score, but—once having done so—will no doubt find rewards in the rhythmic architecture of Goldsmith's original structure.