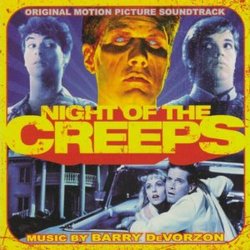 Night of the Creeps

DeVorzon fashions a dynamic ride of a score that buoys all of this classic film's laughs and screams. Bonus tracks feature alternate score cues, songs from the film—including The Diamonds' "The Stroll" and C-Spot Run's (aka Martha Davis of The Motels) "Nightmares"—and an all new audio interview with composer DeVorzon.

A 20 Page CD Booklet features in-depth liner notes with new comments from composer DeVorzon and writer/director Dekker. This is a limited edition pressing of 2,000 units.