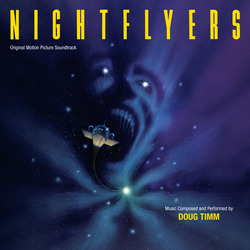 It is impossible to discuss the music from Nightflyers (1987) without acknowledging the heartbreaking story that goes along with it. Nightflyers is the only soundtrack album by composer Doug Timm, who was tragically murdered in Los Angeles just two years later, still at what should have just been the beginning of his career.

At the time of the film's release, Doug was proud to have his score released as a Varčse Sarabande soundtrack album. We are now proud to bring his music to CD for the first time and remember this composer whose career ended just as it was beginning.

Though not well-remembered all these years later, Nightflyers does have its devoted fans and we are happy to introduce this lovely music to a new generation.