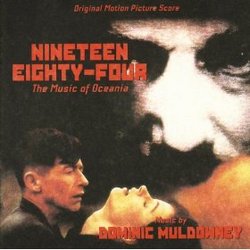 Nineteen Eighty-Four: The Music of Oceania

Performed by
The Endymion Ensemble

In the dark futuristic film 1984, we are presented it with George Orwell's vision of a futuristic world where Big Brother watches over all of us. Composer Dominique Muldowney wrote a score which captured both the harsh cold feelings of an oppressive society, and a warm forbidding romance. Unfortunately, most of the score never made into the final film. Instead, the pop band Eurythmics provided songs that were placed into the film. Now, for the first time ever, Muldowney's complete score is available to the public.

The fanfare from the film, an overly optimistic anthem entitled "Aria", is comprised of overlapping trumpets which climax into a soprano voice singing the praises of Oceania. Much of the score is comprised of soft horns, woodwinds, and a penny whistle - all of which lend a nostalgic air to the music. Other cues are comprised primarily of military marches. There is a subtle integration of electronic instruments, which lends a surreal quality to the score. The "Big Brother Fanfare" reoccurs multiple times in the score although by the end of the CD (and the movie) this fanfare becomes less abrasive, and more romantic in tone.

There are three songs presented as well, including "The Washer Womens Song", which George Orwell himself wrote in the original book. The two other songs are hymns to Oceania, with "Oceania, 'Tis For Thee" using the main Oceania theme, and "The Hiking Song" using a boys choir. This album is very well organized in that it has a nice mix of brash military music, soft orchestral romantic music, and some "modern" electronic music intermixed throughout.

This CD runs about 55 minutes long, and was released through Airstrip One Company, a new record label for which this is their first release. For the first time ever, the complete score to 1984 is available as it was intended to be heard, and I can immediately tell that if it had been retained it certainly would resulted in a different tone for the film. If you're a fan of Dominic Muldowney, or really enjoyed the film, then this CD is definitely worth picking up. But I really don't see the casual soundtrack listener rushing out to buy this one, although they should seriously consider checking it out.