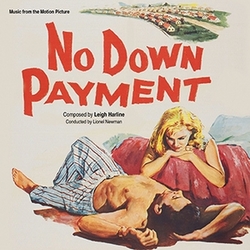 No Down Payment / The Remarkable Mr. Pennypacker

The Twentieth Century Fox film No Down Payment takes a look at life in California suburbia circa 1957, both its surface and its underbelly. The movie is a beautifully acted slice of post World War II drama, well directed by Ritt and wonderfully scored by composer Leigh Harline. Beginning with a bustling main title filled with the promise of suburban living, it introduces us to the world of Sunrise Hills. But soon Harline begins introducing undercurrents into his score, undercurrents that will soon turn from idyllic to dramatic. It's a superb score from a master composer who really understood the film medium.

Two years later, Fox released The Remarkable Mr. Pennypacker. Once again, Leigh Harline was the composer. For it, Harline created a delightful and tuneful score, never pandering to the comedy and helping to give the film a dramatic underpinning. It's a charming score and a Harline highlight from a career filled with wonderful scores, including Pickup on South Street, Broken Lance, Black Widow, House of Bamboo, The Girl in the Red Velvet Swing, Good Morning, Miss Dove, The Bottom of the Bottle, 23 Paces to Baker Street, The Wayward Bus and many others.

This is the world premiere release of these two Harline scores. They have been restored from the original elements in the Fox vault and both are in that great Fox stereo. While every effort has been made to make this release as good as possible, there are a handful of cues with minor damage, but nothing that would warrant leaving them off the CD. This release is limited to 1000 copies.