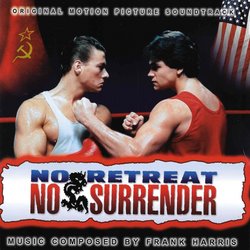 No Retreat, No Surrender - Expanded

The world premiere release of Frank Harris' music to the Jean-Claude Van Damme starrer (his first!) No Retreat, No Surrender that was heard in all versions around the world, except for the US version where his score was inexplicably replaced by one by Paul Gilreath. Our CD includes no less than FOUR versions of the classic Eighties anthem "Hold On to the Vision," featuring Joe Satriani on guitar and vocals by Kevin Chalfant.

This CD features all digital remixes of the songs next to the original mixes, as well as the complete score in chronological film order. The score was recorded in mono for the film in 1986 (the producer wanted it that way), but we have given it a "fake" stereo sound so it sounds richer. Bullseye!