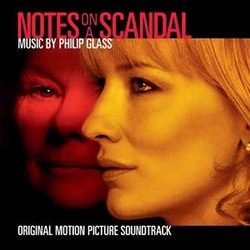 Notes on a Scandal

Review: Notes on a Scandal

I reserve the rarely-employed five-star rating for masterpieces and feel the need to take it out of its dusty case now in honor of Philip Glass\' Notes on a Scandal. The word "rich" is rarely used in conjunction with the name "Philip Glass": indeed, as a practitioner of minimalism, Glass could be said to subscribe to a certain voluntary simplicity, which is quite the opposite from richness. However, Notes on a Scandal is rich. It attains this by using momentary minimalism instead of an omnipresence of repetition. Scores like The Hours and Koyaanisqatsi were built on constant reiterations; Notes on a Scandal instead has many themes and motifs restated but under different guises and in varying combinations, which keeps the material fresh. Glass manages to twist his usual style into quite a unique voice that sounds almost as if Bernard Herrmann and Carter Burwell had been assigned Glass\' style and had integrated it to theirs. It is a masterful culmination of the composer\'s incorporation of the concert hall techniques to the big screen and possibly works better as a film score than most of his past soundtracks. It is an evocative, dynamically interesting, nuanced, and quite simply refreshing score.

The album opens with "First Day of School", "The History", and "Invitation", which all make exclusive use of the woodwinds, strings, and harp. They are restrained cues with dark undercurrents and Glass\' usual style is recognizable if only more expensive and generous than usual. The main theme begins "First Day of School" on the cello before being passed on to the oboe. It goes up three notes before starting again, and again, finally reaching arpeggiac completion and ending on two descending notes, which become a hook that Glass utilizes again and again in his score. Even when woodwinds are used to represent innocence, low strings create a permeating feeling of dread. I admit to not being a huge fan of the woodwinds, but Glass uses them perfectly here as the main voice of the score and they wonderfully play off the rhythmic string section. The greatest combination of the two comes at the halfway point of "Invitation" where Glass extrapolates his dynamic theme for Dracula into a dramatic and exalting progression, soon joined for the first time by the French horn.

"Discovery" is probably the most Herrmannesque of the lot, carrying impressions of Psycho and reprising the two-note end motif for flutes and celeste over menacing contrabasses. The motif is then taken up by the bassoon and English horn and is reiterated in such a sequence as to remind one of an inverted Jaws motif. This miniature theme is joined by a recurring 1-3-1-2 ostinato which likewise ends up permeating the score under various guises. "Someone Has to Die" uses this pairing again, where the wicked flutes reprise the motif over the 1-3-1-2 ostinato for contrabasses. The strings then entwine in a cacophony which is sealed by piano and bass drum bursts. The drum joins the orchestra in track 13, intensifying before the piano and the entire string ensemble join in a mad pursuit, and continues to become more and more ubiquitous in the score, climaxing in a rhythmic percussive attack in "Betrayal", one of the highlights of the album. This bass drum figure is more Goldenthalesque than Glassian and it introduces the return of the variation on the Dracula theme before a spectacular muster of the orchestra is realized based on the two-note end motif.

The following track, "It\'s Your Choice", ushers in a dramatic rising line in dotted quarters over a 6/4 rhythm that is reprised in the very last track. It is a line that has the effect of producing a quadruple rhythm to the melody over a triple meter accompaniment. The melody is given respite by an alternating string figure before returning and being punctuated by a bass drum hit. It is preceded in "I Knew Her", the last track, by a dance variation on the main theme. The dramatic rising line is then fleshed out by the flutes in what turns out to be an immensely satisfying climax, comparable to the end of The Usual Suspects, at once elating and dramatic.

Philip Glass may very well have composed a film score masterpiece by toning down the cyclic arpeggia and diversifying his material. Notes on a Scandal is a malicious score, much richer than Glass\' usual minimalism yet still respectful of these idioms. It is powerful, wicked, and masterfully orchestrated and nuanced. It has also quickly become one of my favorite scores and is a joy to revisit. A tip of the hat to the Academy for nominating what is undeniably one of the best productions of Philip Glass\' career.