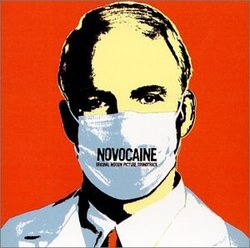 Let me set the stage for you a bit: we've got an independent thriller-cum-black comedy with a strong cast which, to paraphrase Dennis Miller, blithely opened one weekend and then practically hopped on a turbo rocket sled to Blockbuster's 99 cent bin. Any guesses? If you said filmmaker David Atkins' Novocaine, give yourself ten points. But don't worry, because if you had said either To Die For or Freeway, you'd have been just as right. In fact, all three of the films in question feature Danny Elfman's now-patented "quirky independent film scoring". You know the drill: here's some dancing pizzicato strings to tell you what the filmmaker thinks is funny, and here's some strings and choir to tell you what the filmmaker thinks is serious, and finally some electric guitar because the filmmaker doesn't want it to sound too much like all those ugly melodic scores he had to listen to in film school. The irony here is, of course, how commonplace such attempts at this type of offbeat distinctiveness has become.

But director Atkins – whom I assume has nothing at all to do with the low-carb diet I am currently trying – only gets the Elf Man himself for two cuts here, "Main Titles" and "I Wish", full of all of his above mentioned tricks of the trade. The rest of the twenty-odd minutes devoted to the score are ably handled by the highly underused and underrated Steve Bartek, who weaves a much more subtle and engaging score than we can assume the big boss man would have written if he wasn't so busy last year trying to figure out what the hell Planet Of The Apes was all about.

Starting with "Professional Question", Bartek lays down a gentle acoustic guitar and harp vibe which, as it grows and develops, plays a lot like funked-up old-school Thomas Newman electronics with a backbeat. And that's a good thing, considering it has a palpable energy compared to Elfman's by-the-numbers work. Bartek's other highlights include "Tooth Decay", a kind of Tangerine Dream track by way of Paul Oakenfold, and the big and brassy licks of "The Difference".

My biggest complaint about the Bartek stuff is, as well crafted as it is, on the album it plays a bit like wallpaper and is severely saddled by a small handful of songs. The title cut, Penny's alt-rock "Novocaine", is clearly designed to draw the average music listener into buying an album of mostly underscore. And "Le Monde De Frank Sangster" and "Menilmontant" are all hip and French, probably trying to make the normal folks who skip ahead on the listening station at the Virgin Megastore think that this album is another brilliant cult song mix tape, like Pulp Fiction was. Well, unfortunately, it isn't. Fans of Elfman and especially the under-represented Bartek will enjoy what you find here. All others should consider trading their hard-earned cow for a different bag of magic beans.